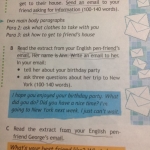 Текст:
Have you
read the article on the Ipatyev monastery? Then you must remember why the
monastery was called “the cradle of the House of the Romanovs”. Yes, it was
connected with the election of Mikhail Romanov as the tsar of Russia in 1613.
The Romanov dynasty ruled Russia for three centuries . Many tsars visited Kostroma and the Ipatyev
monastery.

— True), какие не соответствуют (2 — False) и о чём в тексте не сказано, то есть на основании текста нельзя дать ни положительного, ни отрицательного ответа (3 — Not stated).
One of the most significant dates during the reign of the Spanish Catholic Monarchs was 12th October 1492: the discovery of America by Christopher Columbus.
The fact that Christopher Columbus (who was not originally Spanish) appealed to a foreign court to offer his services proved that the discovery of America was not unexpected.
Portugal and Spain were well-advanced in the exploration of overseas mercantile routes and Sevilla, a wealthy Spanish city, was by then an important commercial centre. We know that the African routes were closed to Spain in favour of Portugal. In 1479, Alfonso V of Portugal recognized the rights of Spain over the Canary Islands, while Spain ^recognized the rights of Portugal over the Azores, Cape Verde and Madeira.
The Canary Islands were an excellent bridgehead for alternate routes. Unified Spain possessed in 1492 a powerful war machine, a solid economy, naval experience including the exploration of trade routes and notable scientific-technical potential mathematicians, geographers, astronomers and shipbuilders who had been formed in a melting-pot of three cultures: Jews, Muslims and Christians. Its only rival was its neighbour, Portugal, which, as we know, had put a stop to Spanish expansion in Africa.
Columbus’ offer was rapidly accepted, but during his journey to Asia his caravels unexpectedly came across the American continent.
The Spanish were especially well prepared by history to conquer, occupy, populate and exploit new lands and assimilate new people. America thus became the new frontier-land for those people used to its ways and with the military, diplomats and administrative arms at their disposal to face the challenge. By the middle of the 16th century, they had settled in the two most important viceroyalties, Mexico on the Atlantic, and Peru on the Pacific.
A5 Sevilla was the largest sea port and trade center of the world.
1) True 2) False 3) Not stated
A6 In the 15-th century it was the privilege of Portugal to use African routes.
1) True 2) False 3) Not stated
A7 By 1492 Spain had serious resourses to expand its world influence
1) True 2) False 3) Not stated
A8 The Spanish were not ready to settle on the newly open lands.
1) True 2) False 3) Not stated


Cornwall
Great Britain
May, 17th
Dear Katie,
I am writing to you from an ancient castle on the coast ofthe Atlantic Ocean. This castle is in the west of Great Britain, in a place, which is called "Conwall". это отрывок, можно перевод всего текста?