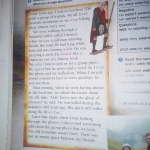 
The story is about my trip a few years ago, one of many hiking trips my friends and I took to Scotland. In the Glencoe Valley we took a group photo with the tall silent white-haired stranger wearing a kilt and a carrying a stick. At dinner the inn owner suggested that the man we met earlier was in fact The Ghost of Glencoe massacred 400 years ago. Sure enough the mysterious Scotsman was not in the group photo.

1) Had had been had had itself had not

3)them that if later

5)wasn't wouldn't be hadn't been wouldn't have been

7)think are thought have thought are thinking

11)if when remember suppose

15)imless if only if as long as

I always wanted to work.I had dreams of earning my own money and I had ambitions.So after my GCSEs i left school.I didnot think about a higher education.All I wanted was to go out into the world feel independent and start working. One of the valuable lessons I learned at school was how to write a CV.i dug up some examples from my old text books and compiled my CV. I must have given out about 20 copies to local supermarkets caffee shops offices restaurants bars building companies garden centres and clothing shops. After two weeks of waiting I got a positive reply and so my first job was filling documents as an office junior.i had to sort all of their files and keep them in alphabetical order.Ok so I learnt the alphabet and lost of new names but after two weeks I was starting to get headaches.And I was not getting any job satisfaction. Then my dad offered me a job to help him out at his bakery.He was getting very busy and needed some extra help.When I started out I was the night baker.I had to get there by 4 a.m.I learnt quickly about the different types of bread and cakes.I got used community meeting new people making friends and feeling useful.Now that job satisfaction! I am now the manager of our shop so my dad is able to rest a bit .I feel proud to be continuing in the family business.Just think that this bakery was started by my great- grandfather and its been selling bread in our town for over 100years! As you an see it took me a while to find and understand what I really wanted for a career.For some people choosing a career is the easiest choice they ever make. My sister knew that she wanted to be a dancer at the age of six.

When I was four months old, my mother died. I had no brothers or sisters. So all my boyhood, from the age of four months, there were just two of us, my father and me. We lived in an old gypsy caravan. My father owned the filling station and the caravan, that was about all he owned in the world. It was a very small filling station on a small country road with fields and woody hills around it.
While I was still a baby, my father washed me and fed me, pushed me in my pram to the doctor and did all the millions of other things a mother normally does for her child. That is not an easy task for a man, especially when he has to earn his living at the same time.
But my father was a cheerful man. I thinks that he gave me all the live he had felt for my mother when she was alive. We were very close. During my early years, I never had a moments unhappiness, and here I am on my fifth birthday.
I was a little boy as you can see, with dirt and oil all over me, but that was because I spent all day in the workshop helping my father with the cars. The workshop was stone building. My father built that himself with loving care. We are engineers, you and I, he said to me. We earn our living by repairing engines and we can’t do good work in a bad workshop. It was a fine workshop, big enough to take one car comfortably.
The caravan was our house and our home. My father said it was at least one hundred and fifty years old. Many gipsy children, he said, he been born in it and had grown up within its wooden walls. Different people had knocked at its doors, different people had lived in it. But now its best years were over. There was only one room in the caravan, and it wasn’t much bigger than a modern bathroom.
Although we had electric lights in the workshop, we were not allowed to have them in the caravan as it was dangerous. So we got our heat and light in the same way as the gypsies had done years ago. There was a wood-burning stove that kept us warm in winter and there were candles in candlesticks. I think that the stew cooked by my father is the best thing I’ve ever tasted. One plate was never enough.
For furniture, we had two narrow beds, two chairs and a small table covered with a tablecloth and some bowls, plates, cups, forks and spoons on it. Those were all the home comforts we had. They were all we needed.
I really lived living in that gypsy caravan. I lived the evenings when I was in my bed and my father was telling stories. I was happy because I was sure that when I went to sleep my father would still be there, very close to me, sitting in his chair by the fire.
My father, without any doubt, was the most wonderful and exciting father any boy ever had. Here is a picture of him.
You may think, if you don’t know him well, that he was a serous man. He wasn’t. He was actually full of fun. What made him look so serious and sometimes sad was the fact that he nevr smiled with his mouth. He did it all with his eyes. He had bright blue eyes and when he thought of something funny, you could see a golden light dancing in the middle of each eye. But the mouth never moved. My father was not what you would call an educated man. I doubt he had read many books in his life. But he was an excellent storyteller. He promised to make up a bedtime story for me every time I asked him. He always kept his promise. The best stories were turned into serials and went on many nights running.